We’re a third of the way through the year (time flies?). When I think back to the day I flew home, it seems so long ago, and it also seems like no time at all.

I thought it would be fun to share how I did in my habits this year and to see how they’ve grown or changed.

As you can see, I did well in the few habits I started out with. I’ve talked about what they were and why I chose small goals before so I won’t go over that again, but you can see it was a good month for me habit wise. This was really important because most days, just doing those few things was all I could manage. I added in Bible reading halfway through and that went well, but it took those two weeks for me to feel comfortable adding a fifth habit. #BuildALadder

I started sleeping better and feeling more energetic, so I added in walking. My idea was to add it in and see how I had done at the end of the month. As you can see, it didn’t go so well. I actually think the biggest block was location; every other habit I could do in my office, but the treadmill is at the other end of the house, and most days I simply forgot. 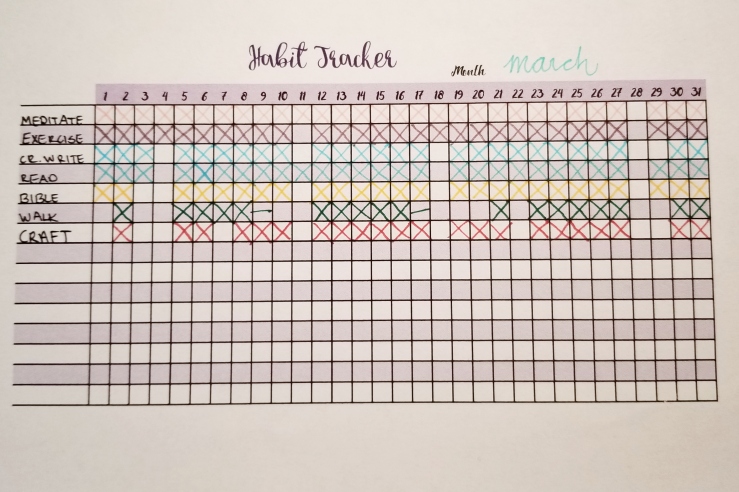 But in March I decided to become more intentional with walking and did pretty well. I also added in crafting, because I have a lot of projects that I want to finish, and unless I made time, they would lie there. I decided to keep the habit mini-sized because crafting is a relaxing hobby and I didn’t like the pressure of having to do it.

And April. I added the “no spend” category, which I knew I couldn’t make a full run of, but it was nice to see how often I didn’t spend money. It was also kind of a wake-up call because there were so many days I did spend even a little bit of money. I made an expense tracker for the first time in my bullet journal (I always used an app before), and that made it easier to track. The month overall was a little spotty, because I had a lot more social engagements (yay) that took my focus away from doing my habits. That’s something I’m going to be working on in the next months; keeping my habits going even on really busy days when I don’t have much spare time. After all, that’s the point.

Habit tracking has been really good for me. I find it provides the accountability I need to keep doing things. If I just keep the desire formless in my head, I know I won’t follow through, but it appears that even the small act of making x’s on a page is enough to keep me faithful. I was curious about that because keeping up with habits has been a problem for me in the past, and I wondered how I could overcome it without getting a full blown accountability partner or another more hardcore method.

But it seems to be working! What has your journey with habits looked like? If you have trouble knowing what to do or how to keep it up, I suggest reading both Mini-Habits by Stephen Guise and The Four Tendencies by Gretchen Rubin.