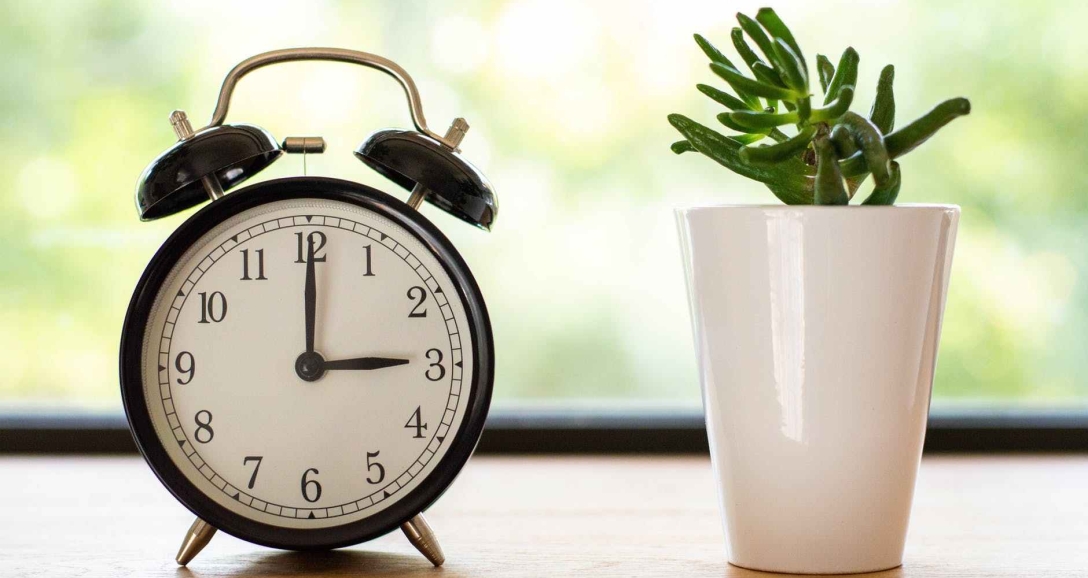 As someone who loves, loves, loves productivity and, let’s face it, gets high off of self-help books and apps, I thought I’d share my list of the top 4 apps that have actually improved my life.

Being a multipotentialite means you spend a lot of time moving between interests, and it can make keeping up with one to-do list or project difficult. Keeping track of where you are, what stage you’re on, how many hours you’ve invested, etc., is never easy even with just a couple projects, but when you have as many as the average multipod does, it can be downright impossible to keep things organized.

I’ve tried a number of apps and websites and tricks over the years, but these 4 apps are the ones that have helped me make changes the most or stuck with me the longest, so take it from a seasoned mulipod/planner that these work! 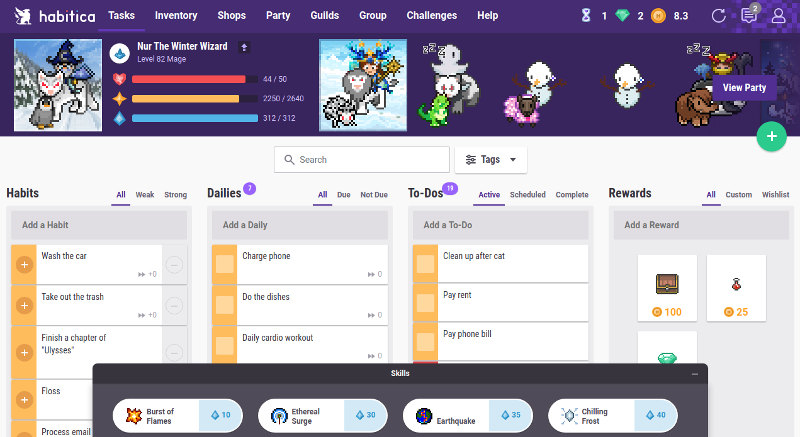 Oh gosh, you guys, I can’t rave enough about this site/app. I’ve been using it for almost three years now, ever since I was in Korea, and it made to-do lists and keeping habits way more rad. Now, you kind of have to be a bit of a nerd to appreciate it, since it’s styled after old-school RPGs with cool armor, pets, mounts, and quests to level up, but come on…defeating a manic tree monster by slaying a to-do list? How awesome is that?!

Seriously though, it made tracking my habits, goals, and to-dos a lot more fun, which made it more likely for me to get on there and actually do it. Sure, I may have made a few throwaway to do things to cross off just for the heck of it (make Habitica account – check, check off make Habitica account to-do – check), but I’ve also used it to up my word count during NaNoWriMo and meditate almost daily (not counting that small period a few months ago…ahem).

To do lists are manna to me, but for some, they’re dreadful, responsible, tax-levels of awful that bring on shivers and convulsive hair-pulling. And I get that. But I suggest trying it out. You just might find conquering feral dust bunnies to be right up your alley. This one is fairly new, and honestly, I don’t plan on using it for very long. It was more of a diagnostic app than a daily one. Basically, TimeLogger lets you track how many hours you spend a day doing various activities. You can make your own set of categories, and then see the cool pie chart that breaks your day into percentages. Yeah, work and sleep are going to be the major ones (50 hours of sleep…really?), but it’s the other stuff that I was interested in (17 hours this week on entertainment…that’s like a part-time job…on ENTERTAINMENT).

It’s the same idea behind keeping a food diary; being aware of your patterns will help change them. It’s been helpful for me to see how long I spend watching TV and mindlessly surfing the web compared with how little actual time I spent working on my goals. I thought I was spending at least five hours a week on goals – try one hour. Yikes.

It was a good wakeup call, and I’m going to keep it up for at least a month to get a more accurate picture. But it is kind of a pain to remember to start each activity and then remember to end it, so you don’t end up with 6 hours of bathroom time. Yeah, you can track whatever you want. This one goes hand in hand with TimeLogger, because it tracks app usage on your phone, as well as total time spent and how many unlocks. Mel Robbins said on average, people unlock their phones something like 150 times a day, and I wanted to see if that was true. I didn’t think it was for me, because I’ve never had a social media problem, but I was still curious how long I spent on my phone each day. I spend most of my time in the mornings (a problem in itself) or listening to music, but I still unlock about 50-80 times a day. Below average, but enough that I could cut down on it. 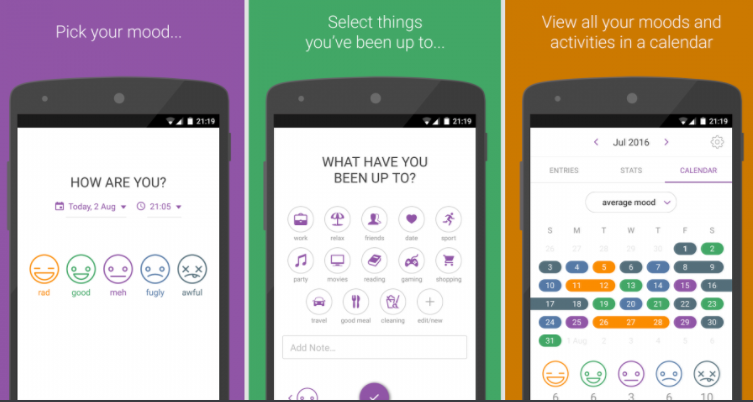 Daylio has taken the place of my mood tracking, which I was never great at anyway. I just didn’t see the point in tracking my mood, when I was tracking things like medication changes and panic attacks…but you can see how silly that is, right? Mood tracking is very important when you’re on serotonin boosters, as some can cause depression.

Daylio helps me keep track now. I’ve tried other quick-journaling apps before, where you can write a short blurb or even take a picture, but it was too much work when I wasn’t a picture-taker in the first place and it’s super irritating to write long things on my phone. Daylio makes it way easier for people like me by eliminating writing and pictures entirely. All you do is pick the smiley face that corresponds to your mood (from great to awful), and then pick the activities you did that day. It’s a bit like TimeLogger in that you can track what you did each day, but it’s not timed and there’s an option to write a note if you want.

I like the simplicity. There’s a reminder as well, which I set to 8pm, but I’ve found myself doing it a couple of times a day to get a feel for my mood as it shifts.

Aside from Habitica, these are apps I’ve started using only this year, so I can’t say for sure whether or not they’ll stick with me for the long-term. Regardless, I think they’re all incredibly useful for managing time, and not too involved to make using them a time-waster in and of themselves (something I’ve found happens to me a lot).

What are some productivity apps you use? 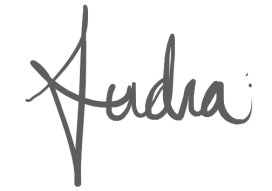