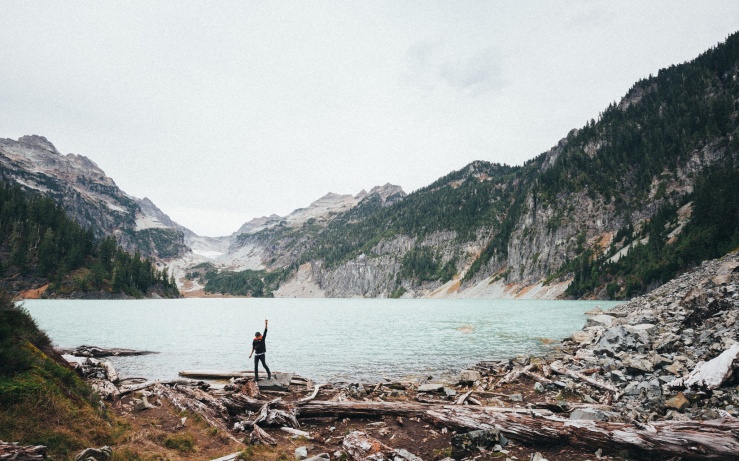 Aspiration – a stock photo (I imagine the photographer telling this girl to pose like she’s about to toss a large rock as hard as she can. Or maybe she’s yelling therapeutically about ex-boyfriends). 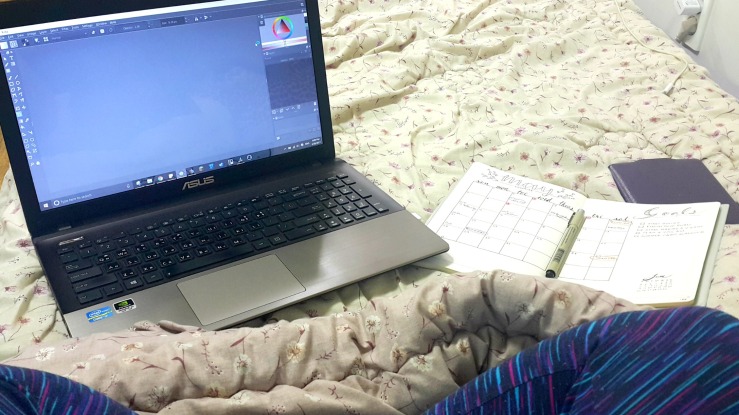 Reality (actual picture of what I do most of the time – compute, read, plan, have dangly cords messing up my bed, and wear not so galactic leggings).

Alright friends, let me sit you down and share with you some truths about living abroad. That term, “living abroad,” conjures up ALL kinds of fantasies and images of beaches and train cars and minimalist backpacks and inspirational quotes with people holding their arms up in the background. Personally, I have never felt the need to hold my arms up to show I’m inspired, but that’s beside the point.

Growing up, I too held these lofty and longing-filled ideals of what a traveling life was. I dreamed about moving to England or Japan or France and being hip, and somehow always being out walking around neat streets or sitting in cafes, and never actually living. I dreamed of baskets on bikes or tote bags on arms full of fresh produce with, somehow, that baguette positioned so perfectly right, just peeking out the top, like a shout to the world that I TOO AM MODERN AND ADVENTUROUS.

Baguettes. Why is bread a symbol of adventure? I don’t know.

What I do know, intimately well, is that traveling around and living abroad are two different creatures. I know the every day of living an adventure. Actually, among my friends, “living the adventure” is kind of a euphemism for all the strange and irritating crap we deal with as permanent foreigners. Like the fact that I can only buy what I can carry home from the grocery store or have to deal with getting taxis since I can’t figure out the home delivery service and am too independent to ask a Korean to do it for me. And I hate taxis, but that’s another story.

That is one truth. The truth that living the adventure often means the really annoying, mundane stuff we deal with every day. Sure, it might be fun and exciting and thrilling the first time your heart hammers at the checkout line, but after the two-hundredth time, it loses its charm.

JUST LEARN THE LANGUAGE, you shout at me, smiling indulgently at this whining white girl who is so lucky she gets to live in a foreign country. But when? I should take night classes, except I get off work at 5 and get up at 6, so I do need to sleep at some point, and work is so tiring my brain probably couldn’t even retain what I hear, and all those projects I need to do, like writing and art and oh yeah, cooking and working out and stuff, would need to be put on hold, and never mind about relaxing because you can sleep when you’re DEAD, but in reality I get stressed out without sleep and then get sick and….alright, a series of unfortunate excuses. That’s my tagline. But it’s true. It’s all very well to say it, but quite another to do it. Yes, another excuse. The series continues…

Here’s the next truth; I will always be a foreigner here. Always. Even if I learned the language so well I could write Korean poetry. So I will always get stared at, always be spoken to in English or avoided because they don’t speak English and I’m SO SCARY, and always be the subject of amazed amusement when I divulge that yes, I do like watching Running Man.

Another truth; even the most exotic thing is normal to someone. So that means that after a while, it will be normal to you too. After a while, when you go back to the US, you will also bow and use both hands with cashiers, and it will be REALLY HARD not to. After a while, you will have a harder time telling the difference between two blondes you meet than two Koreans. I swear this is true. Everyone at the American airport looked the same to me.

Whew, you think, sitting back and doing that half-frown people do when they think, this girl is so NEGATIVE.

Well, here’s the last truth; it’s all hard. And it’s all AMAZING. Despite all these hard truths, I love living here. People ask me all the time why I moved overseas. It’s a hard question to answer, but the truest answer I can give is that I wanted to grow as a person, and by gosh, living alone in a foreign country helps. Living here has pushed me to mature in so many ways. I’ve learned about myself, about others, about relationships and work ethics, about everything. It’s incredible, and it wouldn’t have happened so easily at home.

Is living abroad easy? No. Is it worth it? Yes.

6 thoughts on “The Truth About Living Abroad”